There was a time when I thought computer games were just that – games. And that there was nothing to be learned from playing them. 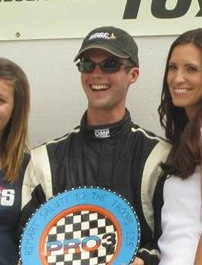 Ryan Hieronymus on the top of a non-simulated podium!

Finally, I was at an event with a VGT simulator, driven by a kid who was kicking everyone’s butt. His name was Ryan Hieronymus (it still is, in fact!). Since then, he has proven he wasn’t just one of those young kids who’s fast on a simulator, but can’t drive a real car. He’s gone on to race in the ultra-competitive Pro3 (Spec E30) class in the Pacific Northwest. He won the championship in 2012. Not bad for a “gamer”!

There is much to be learned through sim racing. Enjoy Ryan’s article, and maybe we’ll see you racing online soon!

As a “veteran” sim racer, I can see several benefits to computer-based driving simulations that everyone can apply to real-life driving. Most people think that all a simulator can teach you is which direction a track goes; it really only helps you if you’re going to a new track, and even then, you have to hope the track you’re going to is actually modeled in a simulator to begin with! The reality is, for those who are willing to put in the time (lots of time, BTW) to really get a feel for your virtual wheels, the benefits of simulator training can outnumber those of driving in real life.

For starters, let’s take a look at what you have to work with, or rather, what you’ll need to do without. In a real car, you’ve got your “seat of the pants” feel, arguably the most important part of putting the whole act together. In my opinion, this is the biggest “barrier to entry” for most drivers looking to get into the simulator scene. I’ve lost count of how many real-world racers I’ve watched climb behind the virtual wheel, take off towards Turn One, go flying off into the wall, and start ranting about how unrealistic simulators are. The one thing they failed to notice was that they entered a 2nd gear corner at the top of 5th gear at 150mph! The reason for this is the lack of a “sense of speed,” or kinesthetic feel, that would give you any indication of how fast you were going.  What you’ll find, though, is by learning to drive without that kinesthetic feel, your other senses start to pick up the slack. Once you’re actually back in a real car, you’ll find it that much easier to drive, once you’ve added that sense again. Imagine having to correct a slide exiting the Corkscrew at Laguna Seca without being able to feel it in any way. Pretty tough, right?

Your vision becomes your biggest asset in sim racing. It picks up 90% of the slack from your lack of kinesthetic input. You’ll find that you will start to rely a lot more on reference points in sim racing. How many of us (be honest with yourself) rely regularly on reference points? How many F1 drivers do you think rely on reference points? I’ll bet they all do. Reference points increase your consistency, force you to look ahead, and help fix mistakes before they happen. Another huge vision-related benefit from sim racing is smoothness, but not in the way you might think. We all know looking ahead helps you be smoother – you don’t need a sim to learn that. But looking ahead isn’t the only thing you do with your eyes to help keep the car in line. Without your kinesthetic feel, your vision (along with auditory input) becomes your best friend when correcting slides. You can’t feel your computer chair lose grip at 120 mph, but you sure can see your virtual cockpit start to rotate!

If you go back and look at some of your in-car video, find where the car starts to slide, either on exit or entry to the corner. You started to correct before you could really see that the car was sliding, right? That’s your kinesthetic input. But go back and watch the video again in slow motion; you can see the camera angle (and thus, the car) start to rotate more than it should – but only just slightly. What if that was the only indication you had that your car was sliding? You’d get a heck of a lot better at recognizing what a slide looks like before it happened, and you’d probably get quicker at reacting, too! Either that or you’d start spinning out more often, and ain’t nobody got time for that! This is a great tool to add to your driving toolkit in the real world. The increase in visual awareness alone is huge, and you will start to notice benefits almost immediately. After dedicating some real time (more on this later) to simulator driving, you will notice that you don’t look at anything on track quite the same way, and your reaction time will be much quicker.

Also, to make up for the lack of kinesthetic feel, your brain relies more on your auditory input. Fortunately, simulators these days are extremely advanced, and car sounds are practically indistinguishable from the real thing. And not just engine noise, but drivetrain whine, brake squeal, tire sounds (skidding, fender rub, etc.), and wind noise. You can even hear your tires picking up rubber marbles if you go too far off line, or gravel if you have an off. There really is no difference between the real thing and a good simulator when it comes to the sounds of racing. That’s good news, because you’re going to rely a lot more on sound to drive your simulated racecar than you do when you drive your real racecar. Why? Because you have to. Again, what if the only way to tell if you’ve locked up a tire was by hearing it? Or the only way to tell if you were experiencing wheel spin exiting a corner was by listening for it? You’d probably get pretty good at noticing those things! It’s just one more tool to add to your toolkit when you’re back on the real-world track.

Another interesting benefit from sim racing: you get to drive almost any car/track combination you could ever imagine. Not only is it really fun, but you can learn a lot from it! Imagine knowing how a Porsche GT3 cup car drives around Silverstone, or how a 1967 Formula 1 car handles the Nurburgring, or how a Formula Mazda reacts to the dizzyingly fast downhill section of Road Atlanta! And these aren’t just virtual approximations of these cars according to some software developer; computer sims now have actual engineers/drivers and TONS of real world data to create a virtual replica of their real- world counterpart.

It’s the same for tracks. The current standard involves laser scanning the real-world location, so that every bump, curb, dip, and tree is in the virtual representation. Not only is it an AWESOME experience, but you’ll learn a lot about how cars just generally drive on racetracks. An added benefit that a devoted sim racing enthusiast gets is knowing that there isn’t a corner out there, or a car for that matter, that they haven’t seen or driven before. And although it might not seem apparent, the benefits will come to you with experience.

I’m not going to lie and say that you’ll be a better racer within hours, or days… or even weeks of driving on a simulator. But if you are willing to devote some serious (and I mean serious) time to learning this new skill, the benefits will be beyond anything you could imagine. Expect to put in hundreds of hours (no joke) of driving on a simulator before it really starts to make sense, and you start to see the similarities between a computer and a real racecar.

Of course, your mileage may vary, but if you’re willing to put in the time it takes to see the advantages (and have a lot of fun doing it!), you’ll be glad you did.

To read more articles like Ryan’s, get a year’s worth of Speed Secrets Weekly – subscribe now. You can also read this entire issue by downloading it from the Past Issues.