David Murry is one of those guys who covers all the bases – he’s super fast and smart behind the wheel, he’s a great coach, and he’s a good guy. 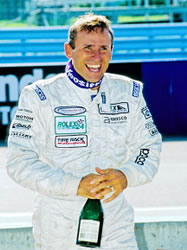 I hear this question frequently (from performance and race drivers of all levels): “How do I know when to work on my driving, and when to work on my car?” If that question has ever gone through your head, David’s article will shed some light on the answer.

One of the best decisions I ever made in motorsport was just after I purchased my Formula Ford for my second year of racing. The car had been run successfully by another driver for two years, so I made a promise to myself: I would spend my first season completely focused on my driving, and only in my second year would I begin working on making the car faster.

During that first season, the only things I adjusted on the car were the front and rear anti-roll bars. I left everything else as it was, while I tuned my driving. It paid off; I won races and a championship by improving myself every event. Then, in my second season with the car, I made some fairly major changes to it, learning more about chassis setup as I went. By then, my driving was a known quantity; I could tell when my car needed tuning, and when my driving needed attention.

I have been racing for over thirty years and I’ve learned a lot of things from many different sources. In my first five years, I drove simply by my instincts, which were fortunately mostly correct. Then I got a job teaching with Skip Barber Racing. I was given an instructor manual with all the classroom material.

During my 10 years teaching for Skip, I learned much more than what was presented in those manuals. I came to realize that I could learn from listening to someone else present the material. Instructors would take turns giving talks on subjects during the schools. Another instructor would say the same thing I would say, but in a different way; it would take on a whole new meaning and a new light would come on for me.

This would prove to be very beneficial. Along with watching cars go around corners 180 days per year, I could begin to see what the car was really doing, where the weight would go, how fast it would transfer there, etc. It opened my eyes to a lot of driving and car dynamics. As some things became clear, it raised more questions on others. This is what keeps our (yes, you and I – type A personalities) interest. Driving and car setup both have the same goal: getting the car to go through a corner in the fastest and easiest way. We must look at it from both perspectives to see what might need changing. When I coach drivers individually and drive their cars, I wonder sometimes how in the heck they are driving them! We’ve all tried to drive ill-handing cars. We need to decide if it’s us or the car setup. Let’s look at both aspects:

To read the rest of David’s article, download Issue #29 from the Past Issues. And to read more like it, get a year’s worth of Speed Secrets Weekly – subscribe now.