Many readers of Speed Secrets Weekly are not just drivers, they’re also instructors and/or coaches, too. And that’s why the news we got three weeks ago hit so close to home, and was so difficult to swallow. 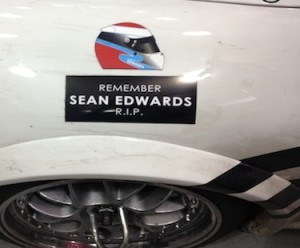 Sean Edwards, a shining young driving star, was killed while instructing from the passenger seat. Ironically, it was the day that Ingrid Steffensen’s article about the reasons someone would choose to be a High Performance Driving Education (HPDE) instructor appeared here.

I never met Sean, but friends have told me that he was a special guy. Not just because he could drive the wheels off a car, and was a great coach, but because he was a great person. He coached for the right reasons: he enjoyed it, was good at it, and he helped his students. I heard many stories about how Sean went out of his way to help other drivers. A few weeks ago, he had traveled to Australia to instruct some drivers because he wanted to. It wasn’t for the money, it wasn’t because of sponsor commitments. He truly enjoyed helping others.

When I first heard of the loss, I held back my own thoughts about the topic that was on so many people’s mind: in-car instructing. I wanted to take time to process everything before jumping in. And as of this moment, no cause has been identified for the crash, so I won’t make assumptions here.

In the past few weeks, I’ve talked to a number of friends who are professional coaches, and who have instructed literally thousands of drivers from inside and outside the car. I’ve also been in touch with many others who are not professionals, who instruct for the same reason Sean did: because they enjoy it. Mostly, these folks volunteer to instruct from the “right seat” (the left seat in some other countries). And the opinions, concerns, outrage, comments and speculations have been all over the map.

I reached out to a small group of very experienced coaches to contribute to this special issue of Speed Secrets Weekly. Rather than focus on the loss of a great person (they all had much to say about that), I asked them to share their thoughts on what can be learned, and what – if anything – should change.

Chuck Hawks, Don Kitch, Peter Krause, Rob Schermerhorn and Kevin York are all coaches who began as volunteer in-car instructors, and are now professionals who make their living from helping others learn to be better drivers. They’re devoted to their craft.

Finally, our condolences to Sean’s family and friends.

Thanks, Sean, for giving back to the sport we all love. You’ll surely be missed in many, many ways.

To read insights from Chuck Hawks, Don Kitch, Peter Krause, Rob Schermerhorn, Kevin York, and Ross Bentley in this special issue, download Issue #27 from the Past Issues. And to read more educational and entertaining article, get a year’s worth of Speed Secrets Weekly – subscribe now.