It’s all about the start… and restart. This issue, that is.

First up, an interview with Dennis Paul, then a couple of short pieces of advice from Peter Krause and Colin Braun. And finally, my usual ramblings. 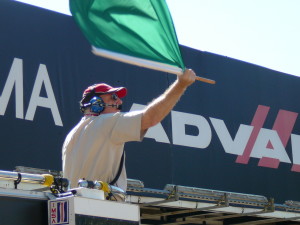 Dennis Paul has been the official Starter for the American Le Mans Series for the past 15 years (the only Starter the series has ever had). When I raced in the IMSA/ALMS series I always felt I had an advantage over my competitors at the start because I could “read” Dennis. He’d been the Starter at my local road racing circuit, Westwood Motorsport Park, early in my career (the early ’80s). In some ways, we both moved up the ranks of pro racing together, and more than one driver I know has said he’s the best Starter, period.

When Dennis isn’t working ALMS races or at his real job (Professor of Pharmacology at LSU Health Sciences Center where he does research on analgesic drug development… Oh, and on a cure for cancer!), he races a 1972 Porsche 911 (since his ’74 RSR was stolen and burnt to the ground) in PCA and the Gulf Coast Racing Series events. Dennis says, “Other than going to a lot of cool races, racing a Porsche, doing ground-breaking research, and enjoying the New Orleans life, my life is pretty boring.” Yeah, right!

RB: As someone who’s been a starter for many years, in many types of racing – and someone who races yourself – what are the biggest mistakes you see drivers make at the start of a race?

DP: The biggest and most common mistake is trying to win the race before the first turn. I know it’s been said many times before, but it’s worth repeating, “You can’t win the race in the first turn, but you sure can lose it.” Another mistake is not paying attention to what gear you’re in. This usually ends up with someone hitting you from behind.

RB: What can you tell drivers that will help them get great starts?

DP: Look for a “tell.” Some starters will dip their shoulder or lead with their elbow before they raise the flag. If you find a tell, the 1/10th of a second advantage that you gain may get you a row on the start. Also, at some tracks, the back of the field cannot see the starter when the green is waved (eg., Road Atlanta). If you’re in one of the slower classes and start towards the back of the field, have a crew member watch the starter and transmit “green, green, green!” over the radio as soon as the starter moves. Next, know the rules of your series. Most sanctioning bodies allow you to pass as soon as the green is displayed, but others don’t permit passing until after the start/finish line. Adjust your timing accordingly. Finally, if you’re racing against the same people regularly, you may look for their tendencies and integrate that information into your strategy. Sacha Massen is the master at this…

RB: When you’re racing, do you have an advantage over fellow racers? Do you and the other starters have a secret code that only you guys know?!…

To read the rest of Dennis’ interview, download Issue #20 from the Past Issues. And to read more like it, get a year’s worth of Speed Secrets Weekly – subscribe now.